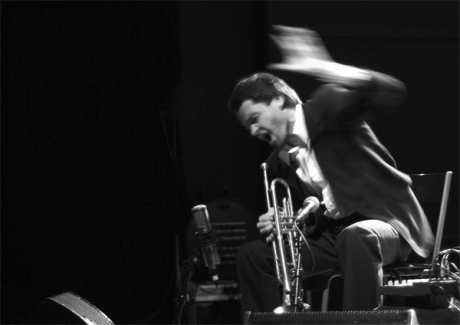 
alīzādeh is an iranian composer, radif-preserver, researcher, teacher, and tar- and setar-instrumentalist and improviser, described by allmusic as a leading iranian classical composer and musician.
he has made numerous recordings with musicians including shajarian, nazeri, khaladj, kalhor and gasparyan. his discography can be challenging, but rewards the patient hunter. i have more than a thousand songs where this man's involvement is testified. i admit: maybe half of it gains my full attention. but then, the rest is still a lot of good music. i mean real, good music. found it a good compromise to share a personal choice of favorite songs - an appetizer, not more. just starting from somewhere, these songs here were chosen from 5 different o.s.t.'s. this could attract people who otherwise listen to ghedalia tazartes, :zoviet-france:, jim o'rourke, 12-string guitarists. 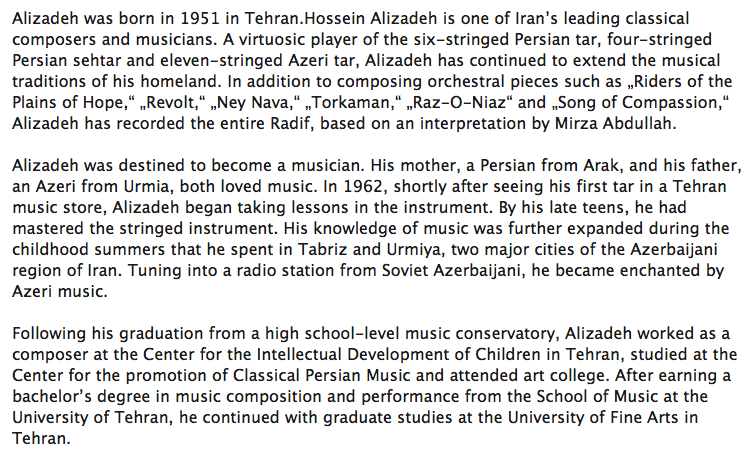 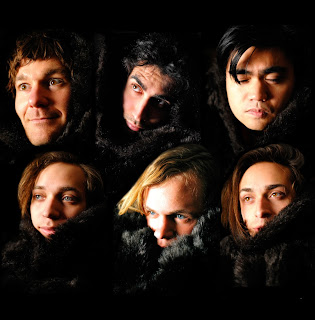 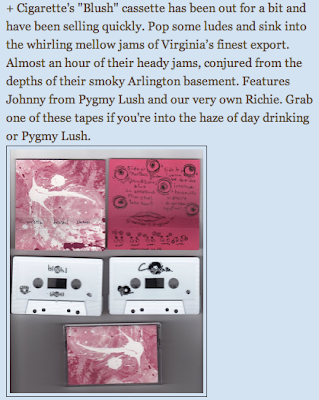 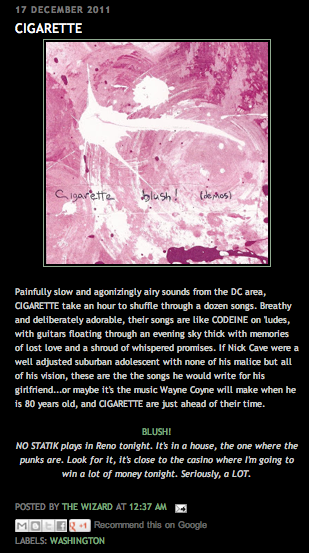 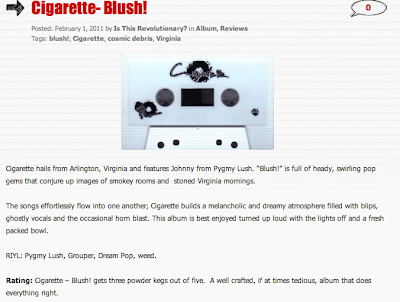 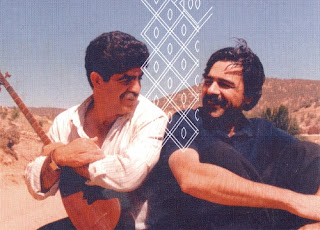 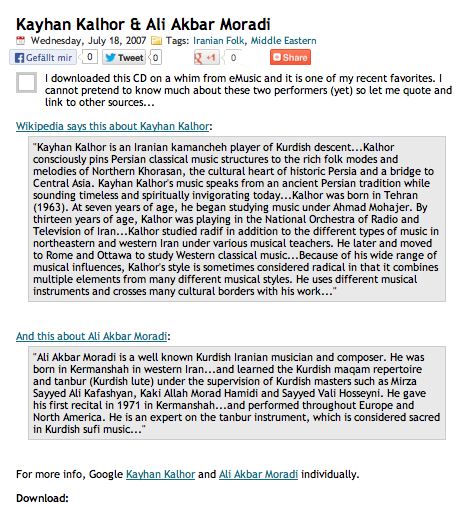 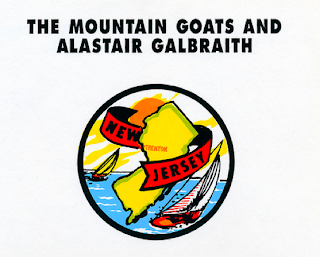 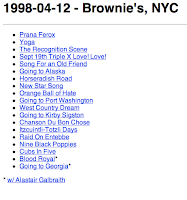 in this folder you'll find the >orange raja, blood royal< 7" which was recorded over two continents in june/july 1994; assembled november 1994 and released on walt records in 1995. "evening in stalingrad" and "original air-blue gown" were recorded in 1996 and 1997 and appeared on >full force galesburg< on emperor jones in 1997. the live recordings of "blood royal" and "going to georgia" were banned on tape in NYC in 1998. 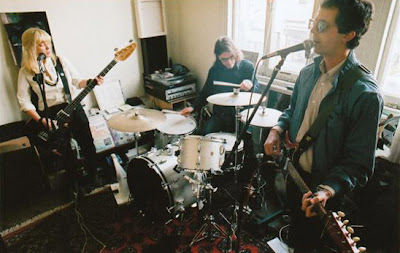 Panel of Judges was a rock band from Melbourne. Dion Nania began the group in 1997 as a solo project, then added Alison Bolger, Michael Nichols and Paul Williams soon afterwards. The band's sound had this harsh velvet poprock to it like many records on Flying Nun Records were famous for. Nania, originally from Geelong, had played with the Golden Lifestyle Band; Bolger, originally from Brisbane, had played bass in Clag and Sleepy Township and in looser configurations such as an improvisational group with Mia Schoen and Ellen Turner; Williams had been a member of Perth group Molasses and, in the early days of Panel of Judges was also drumming in Melbourne band Jaguar is Jaguar; and Nichols had been a formative figure in the Hanshalf Trio in Melbourne, Crabstick and Blairmailer in Sydney, and the 'travelling' group Ruff Buff.
Panel of Judges' first release was an EP, Blind as a Bat on Chapter Music in 1998; their debut album Cool Fool was released later that year after which Nichols left and the band continued as a three-piece. They travelled to Europe in 2002, playing in London and Paris, and returned in 2004 to record their second album No Scandal - No Future - In Heaven, the title of which was 'stolen from a card left on Serge Gainsbourg's grave'. They have since toured Japan and New Zealand; their third album, Bad Vibrations was released on Mistletone Records in late 2008. Soon after their fourth album "Moods on the Move" was released in 2012, unfortunately, the group disbanded. However, Dion Nania is now playing in the great band FREE TIME. 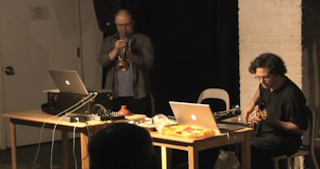 glen whitehead and michael theodore released PANAUROMNI in 2010 via INNOVA. this one suits people well who like arve henriksen, golden retriever or peter >sonic boom< kember. 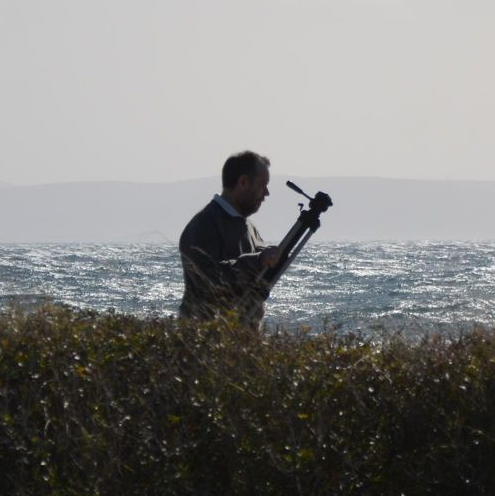 [-]  by  f r a n ç o i s   c o u t u r e
The work of Costis Drygianakis may not have enjoyed much recognition outside Greece, but his activities as composer, teacher, and label director (Edo) make him an important animator of the avant-garde music scene outside Athens. He has published recordings with the collective Optical Music and under his name.
Drygianakis was born in Volos, a region he remained dedicated to as he struggled with other artists from the realms of music, theater, and visual arts to keep an experimental cultural scene alive. He studied physics at the University of Thessaloniki, but by 1985 (at age 20), he had already decided to devote himself to music. He began playing keyboards in his teens with Egopigo, a semi-professional group that left no recordings. In the summer of 1984, he came up with the name Optical Music, which he applied to a loose collective of musicians (including Yiannis Argyropoulos, Christos Kaltis, Kostas Pandopoulos, and Alexis Karavergos) working as a studio unit. Approaching music as a source of images, applying concepts from visual arts to improvisation and composition, the group blended acoustic instrumentation with electronics and Greek folk influences with contemporary classical, avant-garde, rock, and jazz. A first album came out in 1987 and the group broke up. The development of sampling and recording technologies focusedDrygianakis' attention for the next few years. He performed in Ross Daly's group and contributed to the electronics laboratory/studioGraffiti in Larisa where he met Stathis Theocharakis (he appears on the EP Egkainia). His new interest in sound collage led to Optical Music'sTomos 2 in 1994, a much different affair with a new lineup (includingTheocharakis, Daly, Christos Foulias, and Dimitris Yiagas) providing source material for him to assemble in a more ambient way. Around the same time, Drygianakis started to teach at the newly inaugurated department of computer music at the Volos municipal conservatory and his activities multiplied. He wrote music for documentaries and theater (excerpts of the latter can be heard on Drama in Volos: Sound Documents 1994-2001) and exhibited an installation at Alli Poli, an art space managed by longtime friends and collaborators Thanasis Chondros and Alexandra Katsiani. In 1997, Optical Music made a couple of rare live apparitions presenting conceptual performances mixing sound, visuals, and theater, but at the end of that year, Drygianakis retired the name and "went solo," ready to assume his work instead of using the protective shield of a collective. When Pandopoulos decided to incept a record label of experimental music, he offered him the artistic direction. Among albums by other Greek electro-acoustic composers, he released a string of solo CDs, including Post-Optical Landscapes (1999). At the turn of the century, he began to perform as a laptop/electronic artists, taking part in improv sessions. He supplied electronic textures to Theocharakis' Wish You a Nice Resurrection (2002).

one can find lots of releases on discogs. please enjoy these four tunes here. henry flynt himself could not have done this any better.

you could hear constantine karlis (high dependency unit) play the drums to alastair's violin three years prior to this record here - the song "koterana" was a crucial part of CRY in 2000. this here is a two-songs-equal-one-full-length kinda thing. very droney. very much like "koterana". i highly recommend RADIANT to listeners of "outside the dream syndicate alive", y'know, when tony conrad met with jim o'rourke and some faust guys in 1995 to perform live in london. 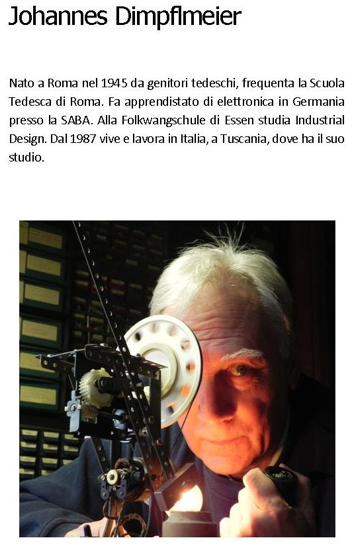