THE GARBAGE & THE FLOWERS

copypasted webwaste:
The Garbage and the Flowers, now based in Sydney, coming out of Sonic Youth-drenched Wellington, NZ in the early nineties, The Garbage & the Flowers were always going to be an anomaly. Denounced as the fifty-thousandth band to sound like the The Velvet Underground, and even as a Christian band in the local street press, the five-piece nevertheless built up a solid gang of devotees, who claimed their sound to be “unique, fractured, and psychedelic” and ideal to take acid with and get stoned to. Championed by songwriter Alastair Galbraith, they released a critically acclaimed first single, Catnip/Carousel , and double album, Eyes Rind As If Beggars, both on US labels. The latter, with its “sun-burning” and lyrical improvisations found them a secure place in the noise-pop canon. 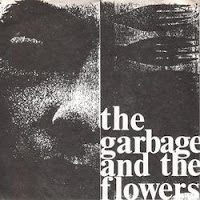 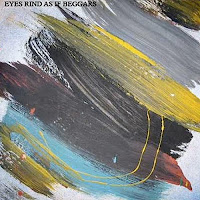 part one     part two
Former drummer Torben Tilly, now of Berlin based electronic duo Minit, described their sound thus: In The Garbage & The Flowers (TGATF) there’s this crystalline structure of a song with its architecture of chords and idiomatic vocal melody. It’s something quite arcane and folkloric, owing a lot to Helen and Yuri Frusin’s song-writing and Helen Johnstones’ sapphirine voice. Being a part of this 5-pronged entity has been something I have really enjoyed and has definitely been influential on my approaches to making music. If all the musical parts work together in an almost mechanical kind of way to create a song it can be really satisfying. Sometimes however, through our own hazardous doing as a band, these songs would become unhinged and collapse into fractured shards of noise and disunion, leaning heavily like wine. This was especially the case when playing live, even if it was intentional or accidental. Part of its beauty was that almost at the same instant that it was falling apart it was beginning to fall back together again, creating a counterpoint of melancholy and joy. I quite like it when it is so chaotic and entangled. Somehow it feeds the imagination and the music takes on a life of its own, revealing secret patterns and ghosts in the recordings.

Based in Sydney since 1997, The Garbage and the Flowers, now a three-piece, are returned to their homeland with revered Melbourne band, Panel of Judges for a five date tour to play songs from recent albums Coronation and Stoned Rehearsal. To celebrate their NZ tour a limited edition split Panel/Garbage & the Flowers 7″ was pressed.

This Wellington, NZ band set a few hearts a-flutter in the early 1990s with a two-pronged strategy of 1.) out-and-out feral noise/guitar damage (“Catnip”), and 2.), the side I came to appreciate them for – a gentle, baroque sort of weirdo folk hum descended in part from (guess who) the Velvet Underground. In case you hadn’t deduced, that’s the side found on this single’s Side B, “Carousel”, and it was my introduction to the band when this single came out in 1992. I was pretty smitten with the song, and still am.


As I understand it, and if you follow the path on the GARBAGE & THE FLOWERS MySpace page – they’re still together, living in Sydney, and are down to a 3-piece from the augmented 5-piece that made this record sixteen years ago. Singer Helen Johnstone is the perfect vocal foil for this band, and on “Carousel”, she sings in a lovely, but cracked, heavily-accented New Zealandese as the band meanders between classical beauty and completely falling apart. Totally dig it, and hope you do too. There was a good, if uneven, archival LP called “Eyes Rind As If Beggars” (hunh?), and it looks like maybe a couple of more recent LPs as well… 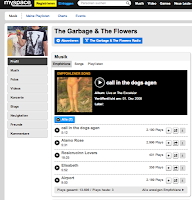 If any of you remember at all, you might remember the Garbage and the Flowers from a Twisted Village single dating back to 1992 (which can still be had for not much money); even less of you, by design, would recall their double album compendium Eyes Rind As If Beggars, issued in a blip in the mid-‘90s. Yet this loose collection of individuals, who’ve lived their days between New Zealand and Australia, have been playing and recording pretty much since then, their music mainly available from cassettes and lathe cuts. Two of the three original members, Helen Johnstone and Yuri Frusin, are still participants, while Paul Yates joins in on one of these two tracks, recorded in 2004 and 2005, respectively.

Both sound in line with their earliest body of work, but one would hope that nearly twenty years of playing music together would bring about a sense of normalcy about them, almost a calming sensation to know that a few people would make this sort of music their lives’ work. “Alamo Rose” drifts along with natural ease, between hushed, reverent sunset acoustic bask and a folkier, Eastern-tinged chorus. It’s peaceful, shambling, and constructed with ever the slightest nod to a pop anthem – one that’s not going to get up off the porch swing anytime soon, but an anthem all the same.


You hear it again in the rangier, electrified “River of Sem” – this one could pass for an earlier Cakekitchen track, bar the vocals, but its chords of hope and slow beat of redemption are of a piece with everything I’ve had the fortune to hear by the band.

Normally I’d be bummed about a group of artists who haven’t bothered to change or update their sound, but I don’t think progression is in the cards here; this is their national sound, so to speak, telling of across-the-world beauty that most of us will never experience. My friend Angela is a native and feeds me the most bizarre and enticing stories about growing up there. I can only imagine that this was a shared experience, and the music I love from that land only enforces that ideal in my mind. 300 numbered copies. (Doug Mosurock)


How relaxed of a band are The Garbage & The Flowers? It's been over a decade since their last release, which means a Greatest Hits collection should be available by the time my grandchildren force me into a home. Both of the songs on this quaint single are filled with a hushed, unhurried atmosphere; this sounds like music made by people whose daily to-do list only consists of "walk the dog" or "water the flowers". "Alamo Rose" is particularly nice, with dual vocals and a slight acid-fried sensation amongst some cooling acoustic picking. "River of Sem" is not quite as soft but still sounds like a happier Brighter, caught jamming on a porch. I'm glad I got to hear these songs, as it’s almost as if The Garbage & The Flowers intended for them to be left out in the sand, slowly eroded by the surf. 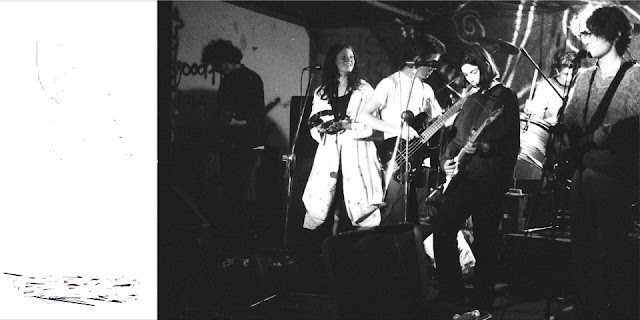 First vinyl release for this group in 12 years, now relocated from New Zealand to Australia. The Garbage & The Flowers were a key NZ underground outfit, coming out of Wellington in the early-90s and playing a fractured folk-punk take on post-Velvets rock. They may have split NZ over a decade ago but their sound is still damaged by that country’s no-fi underground, with a crude production style that pushes zoned vocals up to the front supported by Mo Tucker drums and ragged electric guitar. If you’re a fan of Alastair Galbraith/This Kind Of Punishment et al then this should be pretty irresistible. Hand-numbered edition of 300 copies with one track from 2004 and another from 2005.

The Garbage and the Flowers released this cacophonous gem of a 7" in 1992 on the Twisted Village imprint; the band has continued to record, and if you're enticed by the sounds here, a 1997 collection of their material entitled 'Eyes Rind as if Beggars' can be found on the Allegory of Allergies blog. Dusted aptly described the Garbage and the Flowers' sound as "raw gobbets of gray matter, filthy drone, and vintage ennui," and while I think that the band's lo-fi charms begin to wear in the long-player format, this is a near-perfect realization of harsh, dissonant beauty; Helen Johnstone's strong vocals, alternatively defiant and wearied, are the real draw here, anchoring the recordings as they thrend collapse in their frenzied rush.

The propulsive, feedback-drenched "Catnip" and its counterpart, the austere, resigned "Carousel," offer a bleak vision of modern humanity that is inescapable in its hypnotizing lull. Enjoy! - Ariel   (thedoledrums.blogspot) 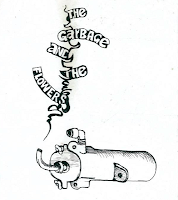 I was mightly impressed when I first encountered The Garbage and the Flowers, a band out of Wellington. Wellington - one of the last places you expect to hear good music from; a city I've always found to be particularly lacking in spirit and stimulation. So it was surprising to hear the Twisted Village 7" Catnip/Carousel and a little later Nothing going down at all, their contribution to Shock Record's Twisted Village compilation Deep Funnels of Entry. The 7" features an energetic, trashy blast of noisy pop ("Catnip") coupled with the almost elegant, folky, drony "Carousel." This sounded like it should have emerged from Dunedin in the early 1980s, which was even more the case with the Shock track; mirroring so many elements of music from that time and place, especially it's Velvet Underground stylings. Not that it was revisionist or anything, just a very welcome, and epic, continuation of a fine tradition. These songs turned up in the early 90s, a few cassettes had also been recorded and released privately at about the same time. After that nothing more was heard of TGATF (the band having broken up in 1992) until 1996 when a couple of tracks appeared on Alastair Galbraith's Next Best Way label compilation Runner. I must guiltily admit to never having heard this particular CD, perhaps one day soon.


Meanwhile a couple of members (Helen Johnstone, who had sang and played viola, and Yuri Frusin, who played guitar) formed a band called Dress (interviewed in Opprobrium) and released a 10" Geraldine pressing...all not particularly useful for those of us who wanted to hear more of these people. So, I was kind of excited when I discovered a double LP of The Garbage and the Flowers was being released on The Now Sound. A limited LP-only pressing of 300 copies, Eyes Rind As If Beggars is good, but not quite as good as hoped. This consists mainly of material from their cassettes, and while approximating the T. Village single and comp. tracks it's obvious the earlier T. Village releases are the band's best work. The album's very primitive in parts (with a particulary "loose" version of "Nothing Going Down;" I don't know why they bothered) but still informed by the kind of psych/folk/Velvets/noise aesthetic found on the other releases (and which has been so important in NZ generally,) just in a way-rougher form. There was talk of Eyes Rind As If Beggars coming out on CD, supposedly being released in 1998. Guess we're still waiting.

Legit fuckups and conversations (broken strings (it's a rehearsal after all, and a stoned one too)), loose lo-fi, with something I'm not used to in NZ noisy indie lo-fi, though it's all undercut by that d.i.y./don't-give-a-fuck attitude, and that's happy sounding chords, happy enough sounding songs, and tangible melodies/appeal. So often records of its kind contain a familiar overarching narrative of (geographical, cultural, historical, personal) isolation and existential dread, but with Stoned Rehearsal the don't-give-a-fuck attitude extends to such angst, producing a profound indifference to anything other than spontaneity, rehearsing stoned with one's dogs (weird), broken strings and all. 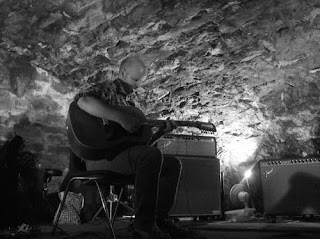 norwegian experimental musician nils rostad comes along mixing everything from folk to drone and pop to field-recording in a way that leaves me positively puzzled anytime i listen to his works. since "harmony hammond" is available for free via bandcamp titled as "H1" plus "ujamt" is a very limited record whose copies were grabbed away soon after seeing the light of day, i decided to make nils' work accessible to the more of the interested few among you.