Europe’s best kept secret comes from south of France, somewhere between the Rhone Alpes region and the Massif Central. Now, If you are wondering how the traditionnal music from there could meet La Monte Young’s “Theatre of ethernal music” in a very abnormal ‘rock’ band, you must hear the sound of France, the incredible project of Jeremie Sauvage (bass), Mathieu Tilly (drums) and Yann Gourdon (electrified hurdy-gurdy).
The music of France is built around the idea that a circular rhythm section combined with the trance-inducing riffs of the hurdy-gurdy can generate an endless series of (micro)tonals variations, bringing the sound to always new unpredictable directions, also according to the site where the music is performed. In fact the crazy thing about these folks is that, wherever they are, they play always the same piece: a long wonderful drone monolith, blowing the listener’s ears like the wind blows on the top of the Alpine mountains.
After years of hidden activity, they come to their official debut with ‘Deux Lives’ recorded part in a church in Den Haag and part in an old wine cellar in Occitanie, finding in a 90 minutes tape the best format to experience their epic-drony-panzerkorp!
3 pannels Fold out silkscreened cover. Limited to 80 numbered copies, factory dubbed tapes. 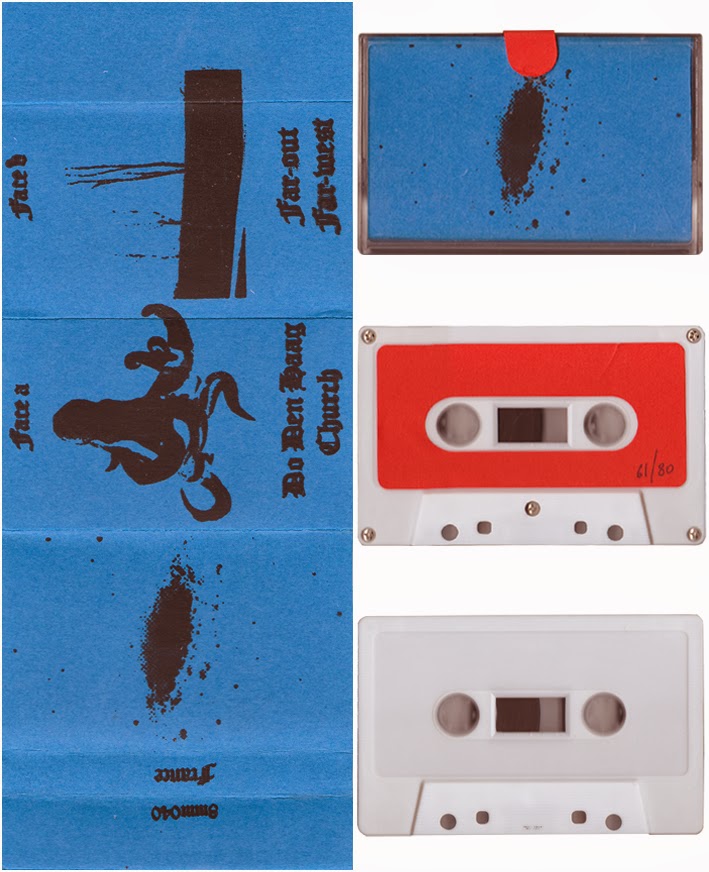 the solitary project of thomas bonvalet initially focused on the nylon string guitar, taking short, dynamic and abrupt forms and limiting itself exclusively to the acoustic possibilities of the instrument. a radical posture, it constantly threatened to put itself at an impasse, seeing itself forced into metamorphosis and movement. the instrument thus became less and less identifiable. At the periphery it absorbed the sound of objects (metronome, tuning forks...) deviating from their common usage, integrating the breath and the sounds rising from the instrumental gesture, splitting up to reveal a new fleeting form. amplification has also progressively taken an essential part in this new instrumentarium/organism. 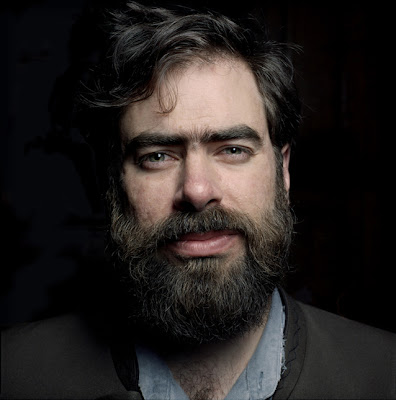 thomas bonvalet lives in alpedrete, spain. he was the guitar player of the band "cheval de frise" between 1998 and 2004, he made his first solo show under the name of l’ocelle mare in september 2005. he toured europe, scandinavia, israel, USA and china. 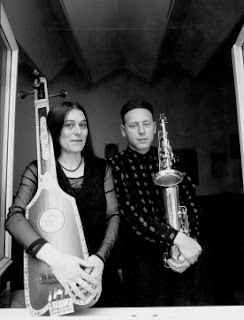 "already awake in the night" is composed by amelia cuni & werner durand with the support of david trasoff on two of the three tunes. it was released on ini.itu in 2011, a vinyl-only release in a limited edition of 250 copies. the record is one the greatest records in recent years. please check out other records like "the art of buzzing" by werner durand or amelia cuni's "18 microtonal ragas", a tribute to john cage. basically, all their records are worth recommending, but this one here stands out. the following information is copy-pasted webwaste.
werner durand is coming from the minimalist tradition. he performs his own music for saxophones, Iranian ney and self-made wind instruments since the late seventies, instruments which he enriched through a variety of materials and playing techniques, including digital delays, providing rich textures and ecstatic rhythms. he also started building wind instruments out of plexi-glass and pvc in the early 80s, which led to the foundation of the ensemble "the 13th tribe" in 1990. he was a member of arnold dreyblatt's orchestra of excited strings and has collaborated with numerous composers/performers including david behrman, david moss, muslimgauze, henning christiansen, david toop, david maranha and ulrich krieger.
amelia cuni is a singer, composer and performer who has trained in the tradition of dhrupad singing. she studied in north india for more than 10 years, between 1978 and 1997, under the guidance of the renowned masters fahimuddin dagar, dilip chandra vedi and bidur mallik. presently, she is engaged in preserving and fostering dhrupad music as well as integrating various artistic traditions with new tendencies. her present work includes early and contemporary music, multimedia and original compositions in collaboration with artists such as terry riley, david toop, maria jonas a.o. she lives in berlin with werner durand and teaches indian singing at the vicenza conservatory in italy.
david trasoff is a senior disciple of the late ustad ali akbar khan (1922 - 2009) with whom he studied sarode performance and north indian classical music since 1973. he has also received guidance from renowned sarode performer dr. rajeev taranath. his recordings include a cd of north indian classical music recorded with ustad zakir hussain.
the music on this LP is based on the hindustani raag lalit and its modulation to raag todi. lalit is performed in the early morning before sunrise, todi later on, after sunrise. here, they are both played against a background of sine waves tuned to the raag’s intervals and going through subtle phase shifting. the restrained sinewaves tapestry, ornamented with amelia cuni’s voice and david trasoff’s sarode result in a music which is radiating an austere peacefulness. 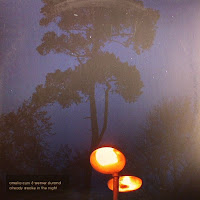 already awake in the night

the title says all, in this case. "endless black" is a dark glass-harmonium drone that was available in 2010 on alastair's bandcamp. it's never been released in any other format than a mp3-file. the tune of 20 minutes length can not be compared to works like e.g. "orb", "mirrorwork" or "talisman", where songs with lyrics, guitars and violins would prevail. 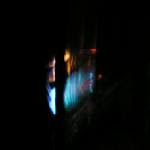 "the wind rises" (or: "támad a szél - hagnapló", the original hungarian title) is a fusion of electronic, ambient, classical and folk elements recorded with medieval instruments (i.e. hurdy-gurdy, hackbrett), harsh metallic percussion as well as elements of operetta. a collaboration between hungarian composer mártha, poet endre szkárosi & the gothic sándor bernáth. sounds of the countryside during communist times, structured as a compulsive dream-like narrative which sucks you into the spiritual struggles of rural hungarian life. 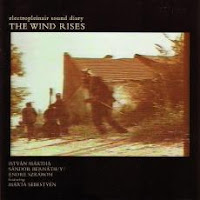 "uklu uklu" is a 40-minute piece called "new cecmediatheque mix" which was recorded live in february 2011 in france. the release in 2012 was limited to 50 copies only. with the exception of monsieur charrier, whose "oldman"-music i like very much, i can't say if the other two musicians were/are active in other ways than this recording here. "uklu uklu" was one of my favorite top-records in 2012 among "ghostly psalms" by philip blackburn or christer hennix' "blues al maqam". it sounds a bit like "an aural symbiotic mystery" by charlemagne palestine and tony conrad (with a cello instead of violin) being remixed by michael northam. a very, very extraordinary drone of the highest caliber.

dreamweapons one and three are widely spread on world wide web. here you have the dreamweapon part two, which alone is worth listening to just for the "november 1965"-tune in which angus is accompanied by this wife hetty. a fantastic piece of organ-drone and melodious bells. 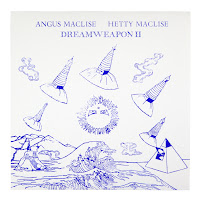 the knit separates were a band formed in san francisco in 1996. the band's members were and are known for their involvements in other projects like social unrest, mirza, the child readers, thuja, skygreen leopards, hala strana and many more. the knit separates' music is more structured and "song-based" than the field-recording character of records related to the jewelled antler collective. 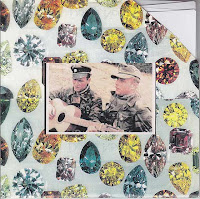 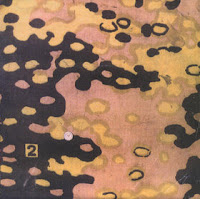 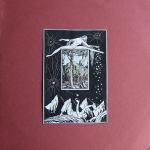 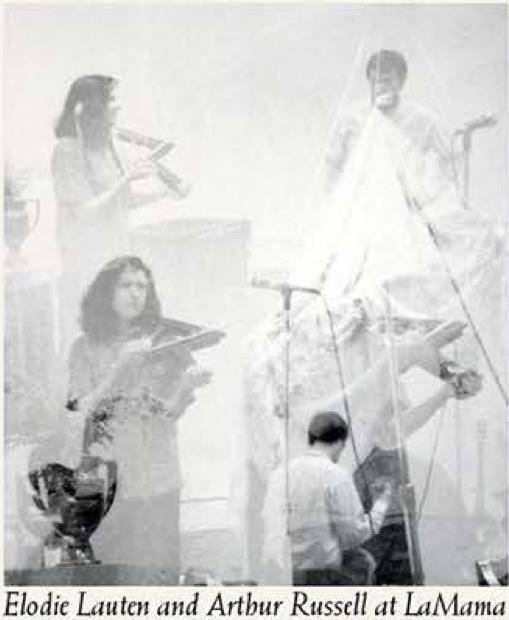 "It was 1986. The rush of excitement over the advent of minimalism had subsided. The orchestra and opera house (yawn) had co-opted Steve Reich and Philip Glass, La Monte Young was in seclusion, Terry Riley was singing Indian ragas. What next?, was the question that seemed to hang in the air. And into that lull poured Elodie Lauten's The Death of Don Juan" (Kyle Gann)

"This is one of the great lost experimental records of the 80s. (...) The first two tracks sound like Joe Jones meets Glass or Steve Reich, with harpsichords, trine (an electric lyre that Lauten invented) and Arthur Russell’s cello. “Death As A Shadow” recalls Meredith Monk’s “Turtle Dreams” but is even more haunting and doomy. Russell’s vocal on “Death As A Woman” even reminds me of MOONDOG 2 and sounds unlike any of his other work. Even the libretto is fab-A+" (Alan Licht) 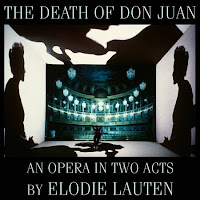